Behind the scenes
Details

The spectator becomes an actor
Details

Our achievements in pictures
Details

The corner of young artists
Details

Shows in our repertoire

After 2 years of absence, the Lake Festival made a comeback in 2022, with development focused on theeco-responsibility, I'inclusion and the social.

This year the spectacle of 70 minutes honored water, with a show pyrotechnic of 70 minutes including, for the first time, a prologue of drone. It's more than 200 000 people who were able to enjoy the show for this 2022 edition.

By going to fetedulac.fr during the show, with a smart phone, a Tablet or a computer, viewers could listen free and very simply soundtrack of the spectacle synchronized and accessible thanks to a completely dematerialized solution guaranteeing a optimal quality of audio transmission and the minimal latency.

But this time, in addition to offering the soundtrack, Electroson Studio adapted the application to make a listening solution suitable for the visually impaired, by also setting up access to a audio description tape. 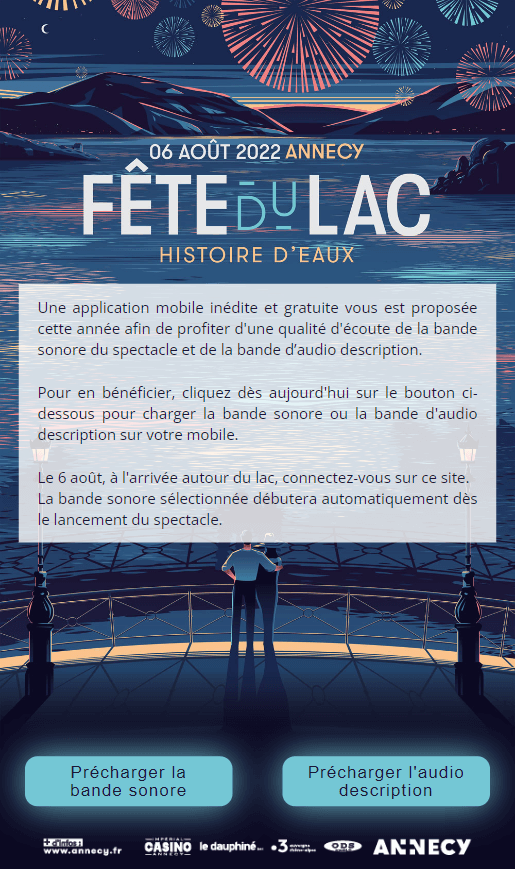 Both soundtracks of the show were very easily and free listenable during the event on the website fetedulac.fr, reachable without the need to install an application, on connected devices, such as smartphones Where tablets.

A few days before the event, spectators are invited to visit the website in order to preload soundtracks (no user action required).

HAS the precise moment where the show is started, our device receives a pulse (called time code) and this automatically synchronizes and inform via 4G network all viewer connected devices. The soundtracks then begin to play on the viewers' devices.

Audio media are directly read by connected devices spectators, thus allowing limit latency as much as possible not relying on a system of streaming (whose latency can reach one minute) but by direct reading on the viewer's smartphone web browser. The developed tool is thus suitable for modern devices allowing audio playback in their web browsers (see compatibility list).

Between August 2 and August 6, the web application registered 7,048 unique visitors, and on August 6 these were between 5,000 and 7,000 devices that were connected during the show.

For the first time, spectators were able to enjoy the show from the heights of the city, with family or friends:

" Seen from Marquisats beach, the soundtrack is a superb initiative. To redo"

" Perfect thank you very much! At the top seen from afar with the sound at the top of Cuvat"

" An excellent idea! Seen from the Parc du Taillefer, the soundtrack really brought a plus! And the sync with the lights was perfect!

" Seen from Poisy and with sound, it was even better! Bravo and thank you for this initiative

Do you also want a simple and free dematerialized system for your spectators which would allow them to have access to a transmission of one or more suitable soundtracks and or inclusive ?

Your event is huge proportion (fireworks visible from several places), visible from afar (sound and light at the foot of which the spectators cannot go), or would require a excessive sound system to capture the expected number of spectators?